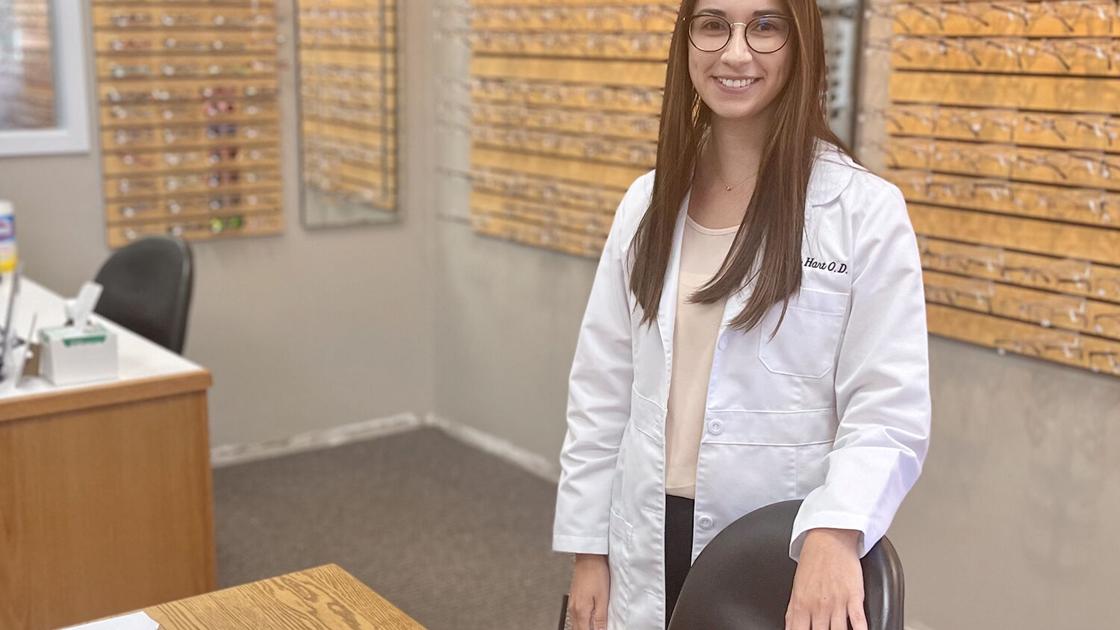 With a passion for optometry and helping people, Dr. Kelly Hart is very excited to serve the Little Falls community and surrounding areas. She joined the Little Falls Eye Care Center, as an optometrist, June 7.

Growing up in Tuscon, Arizona, Hart said she always knew she wanted work in the medical field. It was through one of her classes at the University of Arizona, which focused on eyes, that initially piqued her interest for optometry, she said.

Since she has needed to wear corrective lenses herself since she was in eighth grade, Hart job-shadowed her own optometrist, Dr. Robert Mulgrew. Eventually, he offered her a part-time job on Saturdays as a tech.

“I really enjoyed it. It was really nice. He is one of those that patients just really love. He could really connect with his patients. Some of them he had seen since they were kids, are now grown up and are married. I really liked that aspect of optometry, too ,” she said.

Dr. Kelly Hart joined the Little Falls Eye Care Center in Little Falls in June. Passionate about helping people, she is excited to now be serv…

When meeting with patients, Hart believes it is important to truly listen to them. She is also very dedicated to finding solutions to any problems they may have with their eyes.

Having experience herself with going through various exams and wearing glasses, she can relate to the many of the patients.

Hart said that sometimes patients, especially those who are younger, may not even realize they have a visual problem until they have their eyes checked. It’s usually because they’re so used to seeing the way they do they assume it must be normal, she said.

“I was one of those that didn’t really know I needed glasses,” she said.

While new patients may be leery at first with the concept of wearing glasses or contacts, Hart is happy to help them along their journey. Once they have their corrective lenses, many are amazed at how clearly they can see the world around them, she said.

Hart is looking forward to building lasting relationships with her patients where they return for her services year after year. Many times she also finds out what is going on in her patients’ lives, whether it is a new baby or some other exciting event and more.

“I think that’s kind of rewarding and something that can be a little unique about optometry,” she said.

When she is not working, Hart enjoys spending time with Fenstermacher, her family and friends, watching sports, especially University of Arizona football and basketball, reading, hiking and more.