Getting to know you: Rita Long 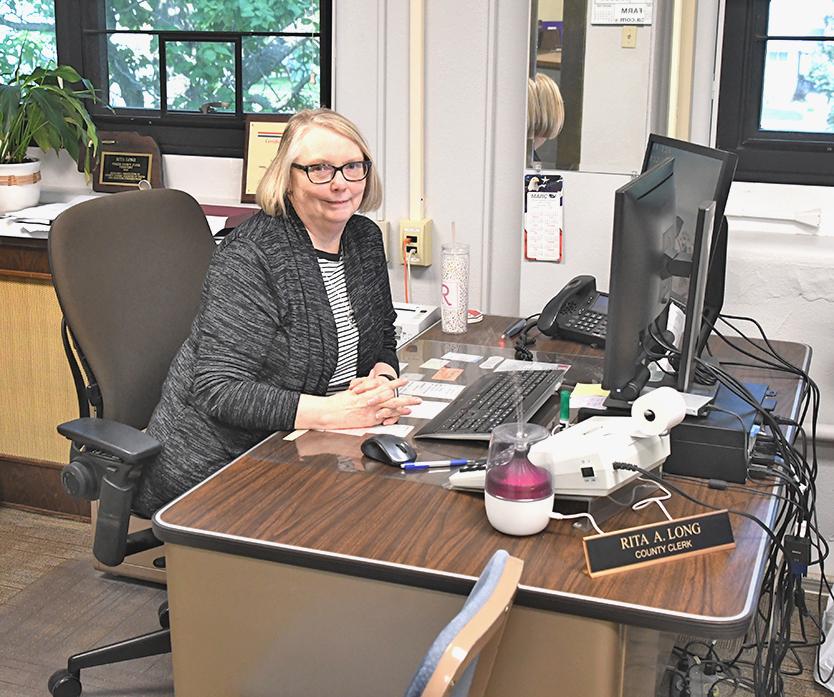 Rita Long is likely well-known in the area for her position as the Perkins County Clerk, but there is much more to know about Long besides her public position.

Long grew up in the small town of Clemons, Iowa with her parents, Wendell and Laurene (Web) Price and her two brothers, one of whom who has since passed away.

Her mother was born and raised in Iowa, and her mother’s grandfather came from Norway, but other than that Long said she does not know much about her family’s history.

She left Clemons and attended college at Marshalltown Community College in her home county where she took some business courses.

Long met her husband Michael “scoopin’ the loop” (also known as “dragging Main”) back in Marshall County, Iowa when they were younger, and the couple has since been married for 46 years. Together they have three children: Stephanie Jones, Michelle Cartwright and Tanner Long.

32 years ago, Long and her husband moved to the area from Marshalltown, Iowa because Michael had started a job with Wendell’s fertilizer, and they have been in Grant ever since.

One of the things Long likes most about living in Southwest Nebraska is small town living. She also appreciates the friendly people in the area.

Before being elected to her current position, Long ran a day care in her home for a while, and then spent 13 years working at First Insight Eyecare.

She decided to run for the clerk position because she thought there might be a good opportunity there, and she enjoyed the work it provided, such as the accounting aspect of the job.

In 2006, Long was elected to be the Perkins County Clerk, where she has handled elections, District Court work, registration of deeds and more

As far as handling elections go, Long said she makes sure they run as smoothly as possible, orders ballots and helps get people registered in a timely fashion.

She also works in the court system with civil and criminal cases, as well as jury trials, and she handles the recording of deeds, mortgages, surveys, easements and more for the county.

On the clerk side of her job, Long takes commissioner meeting minutes, handles accounts payable and payroll, and does monthly, quarterly and yearly reports.

Her favorite thing about her job as the county clerk is how no two days are ever the same.

Long attends the Grant Methodist Church, and she is also a member of the Philanthropy Education Organization (P.E.O.) Sisterhood.

The P.E.O. Sisterhood is a U.S.-based international women’s organization of about 230,000 members, with a primary focus on providing educational opportunities for female students worldwide.

The Sisterhood is headquartered in Des Moines, Iowa, with chapters throughout the United States and Canada.

Through this organization, Long has helped decorate the tree at the local museum every year for Christmas, worked concessions, and given scholarships to women.

Read Along about Rita Long

Long enjoys her position as the Perkins County Clerk, and if she had to choose a new career, she would not pick teaching, as she believes it is a job she would be terrible at.

“Teachers are my heroes,” Long said. “I had some great teachers and so did my kids. In fact two of my kids are teachers because of the examples of teachers they had.”

However, she feels she lacks the patience to handle so many kids every day. She said she had patience for her children, and she can extend that patience to her grandchildren, but it would become repetitive.

When she was a kid, Long said she wanted to become a veterinarian when she grew up because she loves animals and she had many pets including a cat, a dog and a horse. However, allergies to animal dander hit and Long was unable to fulfill that dream. She isn’t able to have any pets of her own now for this reason.

One of the things Long enjoys doing the old fashioned way is canning.

“I love to can fruits and vegetables,” she said. “I have my mom’s pressure canner that I still use.”

She particularly enjoys canning tomatoes, as there are many different ways to can them.

For example, she cans whole tomatoes, salsa, tomato juice, stewed tomatoes and more. She also cans plenty of peaches, beets and other fruits and vegetables.

The single best day on the calendar in her opinion is Christmas, because it is celebrating the birth of Jesus which gives her hope.

Long’s favorite movies come from Disney, Pixar and Hallmark. Hallmark also contributes to her favorite television shows, as do HGTV and the Food Network.

Long’s favorite hobby is reading, and just a few of her favorite authors include Janet Evanovich, James Patterson, Danielle Steel and Debbie Macomber. She is currently re-reading Louisa May Alcott’s “Little Women” for the first time in a long while.

She doesn’t have a particular favorite band, musician or song. She says she simply just enjoys listening to music in general.

Her drink of choice if she is looking to treat herself is any drink containing caramel from Starbucks, but water and ice tea are her everyday beverages.

Her favorite home-cooked meals are anything Italian in nature, and due to her love for Italian food they also make up her favorite kinds of restaurants.

Long’s favorite travel destinations include the mountains and anywhere she can see her grandchildren. The Rocky Mountains are the closest, so they are what she tends to visit, but she said she would like to see other mountains as well.

The perfect day in Long’s mind is getting to wake up and leisurely have coffee before going about the day’s business without any sort of strict schedule.

Her proudest accomplishment is being elected Perkins County Clerk, because she enjoys being able to serve the residents of Perkins County.

The greatest days in Long’s life are the day she married her soul mate Michael, and the days each of her children were born.