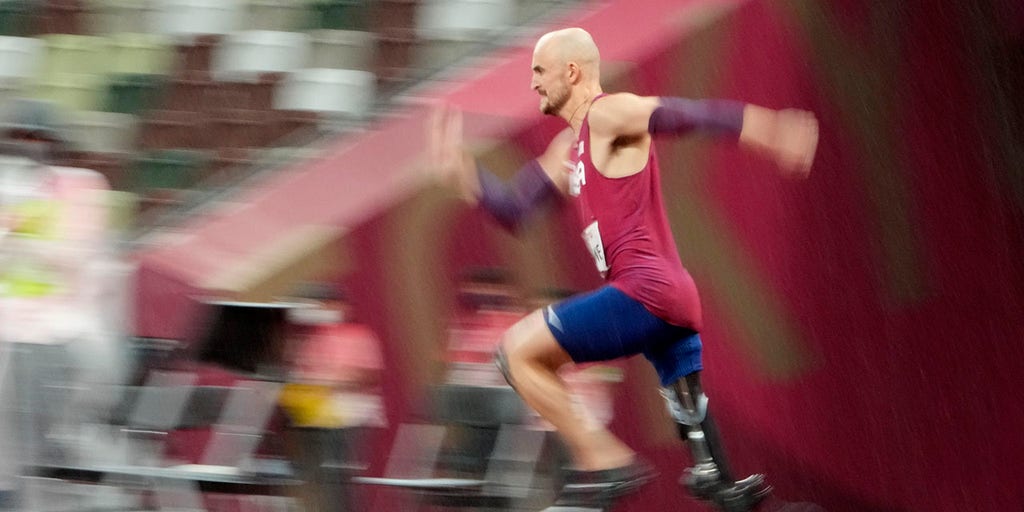 Sam Grewe made a choice when he was 13 to have his right leg amputated after he was diagnosed with osteosarcoma, an aggressive bone cancer.

He could have chosen to keep the leg, but he said it would have been a frail limb once surgeons carved out the “fist size tumor.” That procedure would also have ruled out any sports for life.

“There’s no doubt in my mind that I made the right decision,” Grewe said Tuesday after taking gold in the high jump in the T64 class at the Paralympics.

Grewe said he thought at the time about still wanting to be an athlete.

“I want to lose my leg if that’s what it takes,” he recalled.

His winning jump Tuesday of 1.88 meters was just under the world record he holds for the class at 1.90 (6 feet, 2 3/4 inches). He beat silver medalist Mariyappan Thangavelu of India, who won gold five years ago in Rio de Janeiro. Grewe settled for silver last time.

Grewe, who jumps with a prosthetic blade, cleared the winning height on his final jump of three after his Indian rival missed all three attempts.

“I remember very vividly at my start, looking up at the board and seeing my name second,” Grewe said. “I knew with that jump I was going to clear it because I was not ready to walk away with that silver again.”

Now he has gold. And now the real challenges begin for a 23-year-old man who has already faced many.

Grewe enrolled a month ago in medical school at the University of Michigan, hoping to be the kind of physician he never saw when he was a patient — a doctor with a disability. He’s been studying six hours daily in Tokyo, which he described as “therapeutic.”

“When I lost my leg I had a great health care support system; great doctors, great nurses but none of them had disabilities,” he said. “When I lost my leg I found myself kind of lost. They didn’t point me in any sort of direction. I felt I was kind of dumped out into the world, one leg down.”

Grewe flashed the kind of black humor that is typical of some athletes with disabilities. It could make for an interesting bedside manner.

Asked what area of medicine he might pursue, Grewe suggested orthopedic surgery.

Grewe has been a mentor — actually more than that — to fellow American jumper Ezra Frech, who was born without a left knee and left fibula (a bone below the knee). As a 2-year-old boy, he had surgery to remove most of the leg.

“Sam is an older brother for me, he’s really like family,” said Frech, who cleared 1.80 on Tuesday but failed to win a medal.

Frech is 16 and the youngest member of the American Paralympic track and field team.

“I watched Sam compete in Rio, and I realized that’s what I want to do with my life,” Frech added.

Grewe said Frech would call him almost daily and send videos of his jumping technique. Grewe could empathize easily, already filling a spot as coach, role model, and caregiver.

“I think there are so many lessons that can’t be learned in a textbook for doctors,” Grewe said. “Things like compassion, empathy, taking a holistic approach when you’re working with a patient.”

Grewe said a man in Tokyo encountered him recently as he was walking to the track and handed him a note. It explained that his 10-year-old son had been diagnosed with the same bone cancer that Grewe had, and also went ahead with the choice of losing his leg.

Grewe said the man had seen him jump, which offered assurance that his son would also recover and have a full sporting life. He said the young boy was now playing soccer in middle school, a moment he said that brought him back “full circle” the the young boy he once was.

“I wouldn’t wish any of my peers to go and get cancer so they could experience what it’s like to be a patient,” Grewe said. “But I learned so much during my time as a patient. It almost felt irresponsible to not go out and give back those lessons to people like me who are going through similar experiences.”