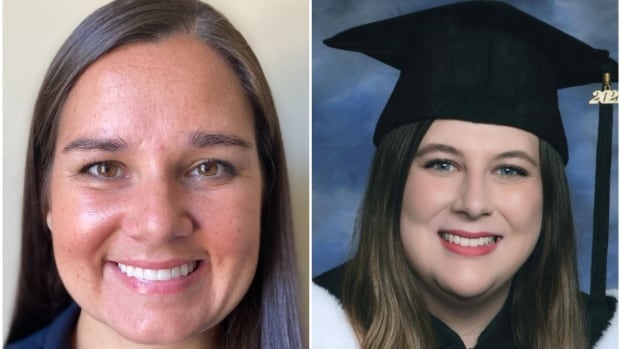 As they begin their first year of medical school, two Métis women have aspirations of helping Indigenous people access better and more equitable health care in the province.

Kirsten Fleury, 24, and Caitlin Wachal, 32, took part in the White Coat Ceremony on Wednesday, as the Max Rady College of Medicine welcomed its largest cohort of Indigenous students ever, with 17 out of 110 students self-identifying as Indigenous.

“I am still feeling like everything is very surreal,” Fleury said after reciting the physician’s pledge and receiving her white coat — a milestone she’s looked forward to for several years.

“It felt exciting and also terrifying that today was finally the day. This is real. I did get in.”

Fleury’s medical aspirations began in high school, but she said her first few years of university were difficult and shook her confidence.

She started working with Métis professor Michelle Driedger as part of an Indigenous research mentorship program at the University of Manitoba, getting involved in projects related to Métis health and wellness. She said the experience bridged her passion for health care and in working with her people and culture.

“It was that moment when I was able to really find a passion with Indigenous health and meeting all of the people I was able to meet through the Indigenous community at the U of M that really springboarded me into deciding, ‘yes,’ this is something I think I can pursue,” she said.

She hopes to one day work as a physician with Indigenous people, either in a clinic or research setting, to simply help improve someone’s day, or to collect information that will lead to systemic and policy changes that will benefit Indigenous people in Manitoba.

‘Challenge some of the health gaps’

Wednesday’s ceremony was equally meaningful for Wachal, who called the moment she donned her white coat ‘humbling and exciting.’

“I know a lot of Indigenous physicians have paved the way to make a place for us and support us on our journey even before we were accepted, so it just really feels like a really great privilege,” said the Métis mother of four.

Her love of science drew her to medical school, and now she looks forward to helping people along their health and wellness journeys. She said her family originally hid and had shame about being Métis, but now it’s a source of pride.

“Being part of the Indigenous medical students’ network has been a great support for reconnecting, but it also is a great opportunity to challenge some of the health gaps that exist between Indigenous populations and non-Indigenous,” Wachal said.

She said she plans to keep advocating for health equity and for people to be able to access culturally safe care and feel like they’re respected and treated with dignity within the health care system. She envisions a career as a physician working in mental health.

“I lost my cousin to mental illness in the spring. That one hits really close to home for me,” she said, adding he had been an advocate and open about his own mental health.

“I would love to be part of peoples’ journey with facing mental illness and working with families and loved ones who are dealing with suicide loss. Mental wellness is universal.”

Fleury also looks forward to being able to give back by mentoring younger Indigenous students on a similar path she was on. She says she’s ‘fallen in love’ with the Indigenous students’ group at the University of Manitoba and is proud so many of her peers are part of the Class of 2025.

“I think it’s really exciting to see the health care system, and in particular the University of Manitoba, actually coming close to fulfilling the changes they want to see,” she said.

She hopes it will lead to change within health care settings too, and more equal representation of the people they’ll see and treat as doctors.

“We can do amazing things such as get into med school and eventually become Indigenous physicians. I think it’s a really exciting beginning.”