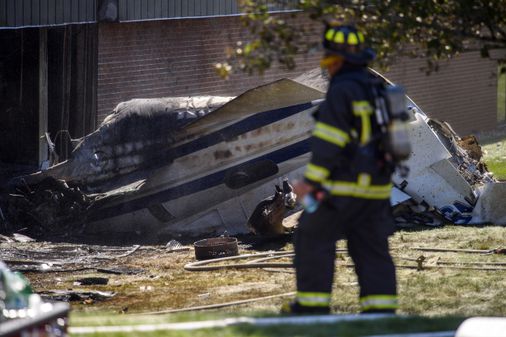 “It doesn’t seem real that I am actually typing this … yesterday morning my little brother Will and his wife, Courtney, died in a plane crash,” Shrauner’s older brother, Ben Shrauner, wrote in a post on Facebook. He described his brother as “the best mix of all my siblings,” with intelligence and “a loving heart.”

“Courtney was a perfect match for him,” Ben Shrauner wrote. “Smart, beautiful, witty, charismatic, and always fun to be around. Two really special people that are gone way too soon. Will & Courtney, I love you. Please keep the Shrauner’s, Haviland’s, and families of the two pilots in your thoughts.”

Shrauner and Haviland studied medicine at Cornell University and received their medical degrees from Weill Cornell Medicine in 2016, records show. The couple had gotten engaged just before Match Day in 2016, when medical school graduates learn where they’ve been accepted to residencies, according to an article Weill posted back then on its website.

Haviland was offered a pediatric residency at Massachusetts General Hospital, Weill said, while Shrauner landed a residency at Brigham and Women’s Hospital for internal medicine.

“It’s nice to have a face on the future,” Haviland said in the article. “It’s starting to feel real. It’s going to be hard to leave here.”

“They were just a beautiful couple,” said the Rev. Matthew Mitchell, a pastor at the Church of the Servant in Oklahoma City who works closely with Shrauner’s father, Randy, a Methodist minister. “They loved medicine, they loved each other, and they loved life. They loved helping people experience the best of their lives.”

Mitchell said Shrauner discovered a passion for medicine at an early age. “Will was headed that direction for a long time — that was his path,” he said.

He added that Haviland was pregnant with their second child. Shrauner’s brother said the couple’s son was not traveling with them and was unharmed.

Shrauner grew up in Kansas and Oklahoma with two brothers and a sister, and went to Oklahoma State University as an undergraduate. Haviland is a Connecticut native who graduated from Brown University in 2010 with a bachelor of science degree with concentrations in neuroscience and literary arts, a school spokesperson said Friday.

Haviland recently concluded a medical simulation fellowship at MGH and had begun a fellowship in pediatric emergency medicine, according to Dr. Ron Kleinman, physician-in-chief at MassGeneral Hospital for Children, who mourned both young doctors in a statement Friday.

Haviland was “universally loved by her colleagues and patients and lived a life full of meaning,” Kleinman said. “Her bright smile and the twinkle in her eye left an indelible mark on all who met her, as did her boundless kindness and compassion.”

Shrauner was a cardiology fellow at Boston Medical Center. According to his LinkedIn page, he began a residency at Brigham and Women’s Hospital in 2016. Dr. Joel Katz, director of the Brigham’s Internal Medicine Residency Program, on Friday described Haviland and Shrauner as “bright lights.”

“Dr. Will Shrauner, who trained at the Brigham from 2016-2020, was an exceptional and committed colleague,” Katz said in a statement. “We are deeply saddened by this tragic loss, and our hearts go out to their families, friends and colleagues during this incredibly heartbreaking time.”

“We are deeply saddened by the tragic loss of one of our cardiology fellows, Dr. Will Shrauner, and his wife, Dr. Courtney Haviland,” the hospital said. “Will, a second year fellow at Boston Medical Center, was well known as an outstanding educator, physician, colleague and friend to many.”

Records show the couple married in June 2017 in Boston and had purchased a home in the Seaport last year.

The crash is under investigation by the National Transportation Safety Board. The Cessna took off from Robertson Airport outside Hartford just before 10 a.m. on a flight headed to Dare County Regional Airport in Manteo, N.C., the Federal Aviation Administration said. Authorities said there appeared to be a mechanical failure during takeoff.

The jet hit the ground a short distance from the runway and crashed into a building at Trumpf Inc., a manufacturer. The impact set off chemical fires inside the building. Two employees suffered minor injuries, officials have said.

Christina Prignano of the Globe staff contributed to this report. Material from the Associated Press also was used.